Skip to content
You are here
Home > Politics > ‘Cover up your papers’: New notice by Number 10’s front door warns politicians after succession of photo leaks

It is the most pictured street in Britain – and very few hours of the day or night go past when there is not at least one photographer chronicling the comings and goings in Downing Street.

But that hasn’t stopped a succession of ministers, advisers and officials inadvertently and embarrassingly being captured with private government documents in full view as they walk out of the famous black door.

Now, in an attempt to curtail photographic “leaks” from Downing Street, officials have put up a prominent notice explaining to those leaving the building of the dangers of “loose” documents.

“Downing Street is a public highway,” the notice states – before warning visitors to ensure that nothing they take out of the building is visible to photographers.

A senior ministerial source said the notice was installed after a civil servant was pictured in September with an official briefing paper setting out options for selling-off Channel 4 as part of the Government’s Comprehensive Spending Review due to be announced later this month. 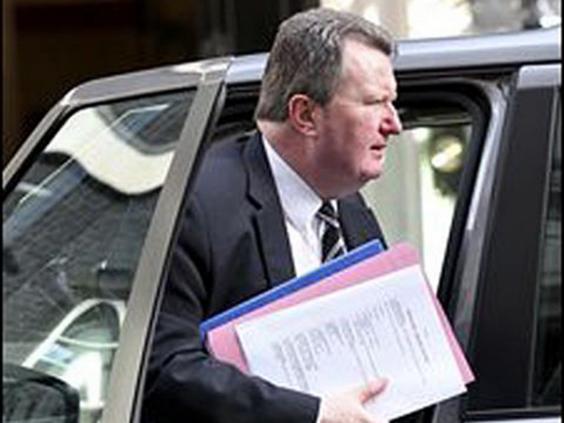 The document was particularly embarrassing as the Government’s official position at the time was that it had no plan to privatise the station.

“The idea is to remind people to be careful at the point at which they’re leaving the building,” said the minister. “It’s not that people don’t know that they might be photographed, it’s just that they forget because they’re thinking about other things. It’s … a gentle reminder.”

David Cameron’s government has been more gaffe-prone than most when it comes to inadvertent photographic revelations.

Last year, Hugh Powell, the deputy national security adviser, was photographed carrying a document revealing that the Government did not intend to take tough action against Vladimir Putin over his aggressive stance on Crimea.

The paper stated that the “UK should not support, for now, trade sanctions … or close London’s financial centre to Russians.” It added that Britain would not support any Nato military preparations. Such a stance was at odds with the Government’s tough talk on Crimea and was quickly dropped after Russia’s military involvement in Ukraine.

A year earlier another No 10 adviser faced embarrassment when he was photographed clutching a document which admitted that some of the Coalition’s 399 pledges had not been met; an “audit of coalition broken promises”.

Cabinet ministers have been caught out, as has Bob Quick, the Metropolitan Police anti-terrorism commander.

Many of the photos have been taken by Steve Back, a freelance photographer who operates mainly from Downing Street and who took both the Bob Quick and Channel 4 photos. He has previously told The Independent that it was “astonishing” that ministers and officials continued to make the same mistake.

“They know that there is a photographer outside No 10 and yet they just don’t cover them up. I must have spoken to the Downing Street press office a dozen times to say: ‘For God’s sake tell them to cover up their documents.’

“Images come out so sharp now that you can read detail that film cameras simply could not pick out. I would say I see a minister carrying readable documents once a month.”

When he was Culture Secretary, Jeremy Hunt was photographed carrying documents appearing to show he was troubled by the readiness of Heathrow for the Olympic Games.

Worse still was Andrew Mitchell who as Development Secretary caused a minor diplomatic ruckus after he revealed a secret document “welcoming” the departure of Afghan President Hamid Karzai. The papers in a see-through plastic folder were headed “Protect – Policy”, and said that President Karzai’s decision to step down in 2014 would make “the country a better place”.

But none of those leaks were as serious as that caused by Bob Quick, Scotland Yard’s anti-terrorism commander, who was pictured in 2009 carrying a briefing paper detailing an operation against an alleged al-Qaeda cell. The blunder led to a news blackout while police hurriedly brought forward a series of raids and Mr Quick’s resignation.